Has the world realised the full extent of the recently launched MONA (Museum of Old and New Art) yet? It sounds like it is the disparate and chaotic glory of the internet laid bare, and made real, not just existing as a series of Wikipedia pages, image searches and forum threads somewhere in the electrical ether.

Reports from close friends about the opening night (which rolled into ‘nights’) made its excess and debauchery sound comparable to Rome’s golden age of opulence: hundreds of excessively expensive caviar tins stacked against walls, free flowing booze, curators from the Australia’s art scene making out drunkenly like teenagers with teenagers, rock stars inserting the phallic supports of collectible modernist design seating into their anus for a viewing public, a trio of naked writhing and trysting women prank calling a phone elsewhere in the gallery. All this tucked away several levels underground, embedded in the rock, on a peninsula of an island, in the southern-southern-southern hemisphere, the furthest point before you’re Antarctic, a million-zillion-gabillion miles from the rich and esteemed art history of Europe and the grand collections of the Americas, Germany, Britain, France and Italy.

The collection and gallery, that is the spirit and body of MONA sounds more like fiction than reality and whose existence is more akin to Charles Foster Kanes estate Xanadu from the film Citizen Kane, or the underwater sanctuary Rapture that was built to promote the unbridled development of the avant-garde and for creative individuals to flourish, or even the animated Super Jail, which is the worlds most secure prison built inside a volcano, inside another volcano, within which the laws of space and time seem to act according to the Wardens will who resembles a mad version of Willy Wonka and can change existence with mere thought like a god. I imagine Walsh, MONA’s creator, has similar superhuman powers within its walls. 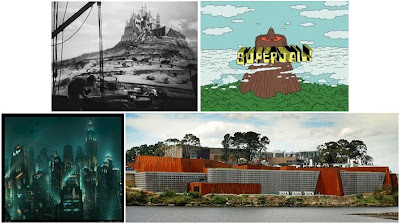 clockwise from top left: Xanadu as featured in Citizen Kane, Superjail from the ultra violent manic paced animation of the same name, (the very real) MONA, and the Utopian city of Rapture from video game Bioshock.

MONA is an anomaly. From the sounds of it, MONA is an entirely new, hybrid, mutant-beast in comparison to its much older and more serious siblings: little boy Tate, Mister Guggenheim, and Miss Louvre. If their family portrait were taken, MONA’d be dressed in odd flamboyantly and possibly metallic coloured sneakers with differing and multiple fluoro laces, trashed and second hand designer jeans so that the fishnets or long johns (depending on the weather) worn underneath were visible, a checked rockabilly shirt, a prim golf knit with an antique Wedgewood brooch, listening to a mash-up of country, classical and Norweigian death metal music on its headphones.

David Walsh is just as much of an anomaly: self proclaimed dilettante and a maverick self made millionaire whose fortune was amassed by card counting and swindling casinos at their own game.

Maybe I am mythologising MONA like new lovers might do. Is there room for mythologising about a phenomena such as MONA whose existence is already somewhat fantastically unbelievable? I recommend ignoring everything I have to say about MONA for now as I’m writing about heresy and rumour. What you should do is google the facts, like the fact that Walsh sunk $75 million in renovations into MONA. To get your googling started, here’s some MONA related links:

and MONAs own site:

Oh how we do love a spectacle and how much more we love to write about them! Good work Ace. Am looking forward to my visit with the girls in April to find my 'pink' work to write about. From this side of the world though (C.A, U.S.A), word has been a small whisper about MONA and only through my Australian contacts. The world is yet to receive the wave of debaucherous news about the Little Apple. BTW, I love your description of the institutions family portrait! Thanks for the post! LOVE!!!

Quality posts is the key to invite the users to pay a visit the
website, that's what this website is providing.
My web site : Scott J. Ferrell attorney

Attractive element of content. I just stumbled
upon your weblog and in accession capital to say that I acquire in fact enjoyed account your weblog posts.
Any way I will be subscribing to your feeds and even I fulfillment you get right of entry to consistently rapidly.
Look at my web site - Deborah Koval

Thanks for some other fantastic article. Where else could anybody get that kind of information in such
an ideal approach of writing? I've a presentation next week, and I'm on the look for such information.
Have a look at my site ... Trick Photography and Special Effects

Hi it's me, I am also visiting this web site daily, this website is in fact pleasant and the viewers are in fact sharing pleasant thoughts.
my web site - Upper James Manor

I have learn several good stuff here. Certainly price
bookmarking for revisiting. I surprise how a lot effort you
place to make this sort of great informative
web site.

Take a look at my weblog :: dnest CDL

Very good post. I am experiencing many of these issues as well.

Take a look at my web-site; dnest CDL

Hi! I know this is somewhat off topic but I was wondering if you knew where I could find
a captcha plugin for my comment form? I'm using the same blog platform as yours and I'm having difficulty
finding one? Thanks a lot!

Hello to all, how is everything, I think every one is getting more from this web page, and your views are fastidious designed for new viewers.

Hi! I just wanted to ask if you ever have any issues with hackers?
My last blog (wordpress) was hacked and I ended up losing several weeks
of hard work due to no backup. Do you have any methods to protect against hackers?

Wow that was odd. I just wrote an very long comment but
after I clicked submit my comment didn't appear. Grrrr... well I'm not writing all that over again.
Anyhow, just wanted to say excellent blog!

This post gives clear idea for the new people of blogging, that genuinely how to do running a blog.

Wow that was strange. I just wrote an incredibly long comment but after I clicked submit my
comment didn't show up. Grrrr... well I'm not writing all that over again.
Regardless, just wanted to say great blog!

Nice post. I learn something new and challenging on blogs I stumbleupon everyday.
It will always be helpful to read content from other writers and use something from other web sites.


Have a look at my web blog :: sex voyeur

Thank you a lot for sharing this with all people you actually know what you're talking approximately! Bookmarked. Kindly additionally seek advice from my web site =). We could have a link change arrangement among us

After going over a number of the articles on your site,
I seriously like your way of blogging. I book-marked it to
my bookmark website list and will be checking
back in the near future. Take a look at my web site too and tell
me how you feel.

Feel free to surf to my weblog: http://www.sexyhotgirlz.
com *gapetube.com*