This selection of Grays newest work revolves around the same concept realised in three different ways. Gray examines the Moiré (pronounced: mwa-rei) effect: an optical illusion which occurs when two sets of grids or sets or parallel lines are overlaid at slightly different angles.

This work is a departure in terms of aesthetics and mediums compared to Grays previous work of delicately sculptured miniature craft forests of paper tendrils and fern fronds or organic colourful chaos, which was a notable presence in his 2010 solo exhibition (‘Attack Decay Sustain Release’) at Craft Victoria and which was the sole focus of his exhibition (another solo: ‘Tudo Que Acho/ Everything I Think’)the previous year (2009) at The Narrows.

The moiré effect is an illusion, a suggestion of something that doesn’t exist and Gray likens this to anthropological forecasting: seeing what is present within contemporary culture and trying to predict the as yet unrealised, undetermined and unknown future. This act of seemingly logical-soothsaying by some individuals has had devastating effects, like the Unabomber Theodore Kaczynski, although more often it has been responsible for envisioning optimistic future utopias as dreamt by writers and dreamers of science fiction, such as musicians Zager and Evans who penned the song ‘In the year 2525’ which forms the title of the exhibition.

These thoughts of the far off future was also inspiration for Grays sound work exhibited as a part of The Zero Dollar Show at West Wing gallery (a temporary space run by West Space) a month before ‘In the year 2525’. Gray recorded an audio tour of Melbourne Central as though the shopping centre were a complex projected reality used as a teaching device for students in the far future as a part of a history lecture.

Grays musings of the moiré effect are manifested as three distinctly different types of work: a large scale installation, smaller drawings, and framed moiré patterns screenprinted on mylar which have then been placed over moiré screenprints on paper, which capture the effect in action. 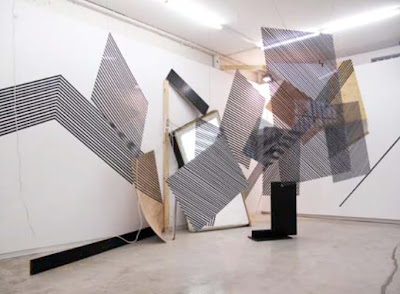 The installation (above) is comparable to his miniaturist jungles of vegetative paper works, except on a larger scale and utilising more industrial materials. Multiple A2 sized sheets of Perspex with parallel lines created with black electrical tape are suspended from the ceiling, which demonstrate the visual interference of the moiré pattern in the wild, a natural environment of angled planes (ply wood panels) and bold straight lines ruling their way through the chaos (long strips of electrical tape). 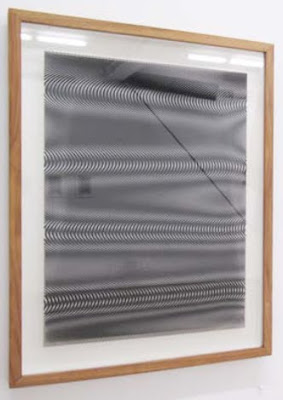 Grays framed works (above) act like smaller versions of the installation: live captured moiré patterns, confined to a restrictive enclosure, living examples of visual interference keep in captivity and trapped for its privileged owners wall.

The drawings are perhaps the most curious of the trio. Being works on paper, the lines share the same flatland and fixed positions, the human eye (and mind) can’t compensate for the discrepancy caused by the mismatched angle of lines.

The exhibition will also host a series of ‘acoustic tests of pre-post-human perception’, which is a pre-post human way of saying 'gig', which will include Snawklor, Mof Far Far Rah, Julian Williams, and Northlands at Utopian Slumps gallery on Sunday 20th of Feburary from 6:00 til 9:00pm.

The present is just a suggestion of a future illusion.