Nothing ever dies. I once heard a metaphor that explained the idea of nothing ever really dying by likening living organisms to hippy communes. All the cells, nutrients and biological building blocks that belong t a living organism are the members of that hippy community. They all share the same vision and ethos. They are dedicated to its ongoing survival. They procreate. They, the members (the cells) of the commune (the living organism) call in help when it’s needed (eating, drinking, medicine). Later, much later, when the organism dies and begins to decay, the members that it consists of shake hands and part ways. They might join another organism. Or they might fossilise. 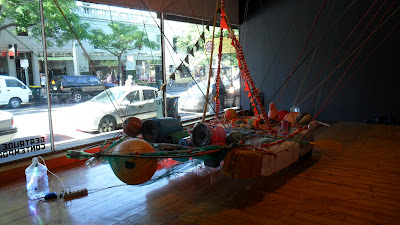 Martorell’s plastic arte-povera constructions have function, unlike many other artists whom also utilise societies plastic detritus as an artistic medium. His works are different and disparate objects collaged into new functioning forms. The objects are united in their collective function, even if the new function of the unified group wasn’t necessarily the original function of the individual objects before they were assimilated.

This idea of ‘functional unity’ is not missed by Martorell who has also included a social and relational element to Agvas De Marco. Throughout the exhibition Martorell has invited different groups of people to conduct discussions, musical performances and workshops. These groups of people can be seen as ‘relational collages’ or ‘social collectives’, and are similar in their functional unity to the objects that compose The Raelian Kraal. For a complete list of events and gigs check the online schedule at http://raeliankraal.blogspot.com.

The Raelian Kraal will have its water launch in late March.

Hey! This post couldn't be written any better! Reading through this post reminds me of my good old room mate! He always kept talking about this. I will forward this article to him. Pretty sure he will have a good read. Many thanks for sharing!

Here is my web page ... webster

Write more, thats all I have to say. Literally, it seems as though you
relied on the video to make your point. You obviously know what youre talking about, why throw away your intelligence on just posting videos to your weblog when you could be giving us something enlightening to read?


Feel free to surf to my webpage crosspiece
my website - wolfram

I love your blog.. very nice colors & theme.
Did you make this website yourself or did you hire someone to do it for you?
Plz reply as I'm looking to construct my own blog and would like to find out where u got this from. thank you

Here is my web-site ... way landscaping

Gday! It looks as though we both have a interest for the same thing.
Your blog, "Blogger: DEAD HARE MELBOURNE ART REVIEW" and mine are very similar.
Have you ever thought about authoring a guest article for a similar blog?

It will definitely help gain exposure to your blog (my site recieves a lot of targeted traffic).

If you're interested, email me at: rhodamartell@yahoo.de. Appreciate it

Hey! I understand this is somewhat off-topic but I
needed to ask. Does building a well-established blog such as yours require a large amount of work?
I am brand new to blogging but I do write in my journal every day.
I'd like to start a blog so I will be able to share my personal experience and feelings online. Please let me know if you have any kind of recommendations or tips for brand new aspiring blog owners. Thankyou!

Hey! This is kind of off topic but I need some help from an
established blog. Is it very difficult to set up your own
blog? I'm not very techincal but I can figure things out pretty quick. I'm
thinking about setting up my own but I'm not sure where to start. Do you have any ideas or suggestions? With thanks