The exhibition shares its name with a pornographic remake of the blockbuster ‘Gladiator’ from 2000, directed by Ridley Scott and starring Russel Crowe. The pornographic remake, ‘Private Gladiator’, is a blatant scene-for-scene refilming of Gladiator, except with over 9000 times[1] more sex. It is also touted as being one of the most expensive pornographic films ever, although its budget would be insignificant compared to the $103 million dollars it cost to make ‘Gladiator’.

The work by Janet Beckhouse and André Ethier mirrors this act of remaking that occurred with Gladiator and Private Gladiator: both extreme variations of what we know about the world with a liberal dose of extra sexuality and energy added.

Beckhouse’s work is littered with skulls, bones, seaweed and mutated sirens of the sea, exposing their junk boldly, like they’re usin’ their goods as the bait for man-trap, akin to the feminine monsters in classic Grecian tales of heroism and adventure.

Each figure is a possible strand or divergent that could have occurred in our own evolutionary history. This idea is given strength by the fact that these beastly femme-fatales are perched within their ceramic dioramas on the side of a vase surrounded by human skeletal remains, our remains, we the failed, unfit, human species. 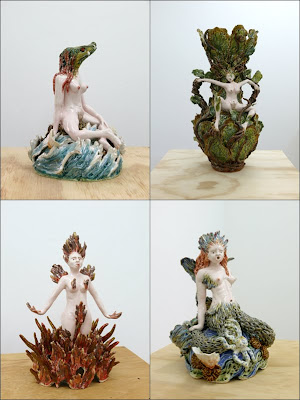 The work is baroque, flowery and leafy. Ceramic isn’t necessarily a delicate medium, museum pieces have proven that it can survive thousands of years, and yet Beckhouse crafts it so ornately. The subject matter occupies a similar dichotomy: the women are physically young and beautiful, but their poses and claws or sharp teeth tell us that they are wild and dangerous, as does the underwater graveyard they live in.

This is work that teenage boys would be very much interested in, from a hormone driven perspective, there is tits and ass, baring all to the viewer with some even adopting the lewd open mouthed expression of blow-up sex-dolls, all framed by grisly elements of death. Generally speaking though, there is more care and meticulous craftsmanship in the work than an average teenage boy would be capable of. 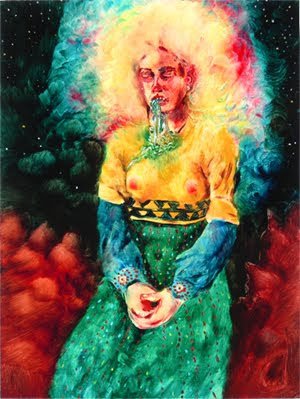 André Ethier’s paintings account for the other half of the work in Private Gladiator. Ethier’s 2-D works bounce layers of bright coloured washes, often spectrally clashing, a visual effect that manically vibes and hums, as if in a drug or fever fuelled state which resonates at the same frequency as the energy and movement in Beckhouses sculptures.

This visual static-mania depicts the visions of an altered state of possible alternative evolutionary forms: hybrid shamans with celestrial flames radiating from their heads, bouquets of mutant plant life mimicking delicate and aroused human genitals, picturesque summer meadows occupied by sedate animal-men with manes that take styling cues from both the carnivorous African lion and the now extinct 1960’s, free-lovin’, hippy-archetype, and the portrait of a star-cheeked, cyclopic, bearded man.

The exhibition as a whole is both balanced and in conflict between the two fantastical strains of work as a collective as it is obvious the work is by two different artists, working in two different disciplines and mediums, yet both stylistically complement each other so well. Private Gladiator flits in spasms between sex and death, the fragile and the dangerous, creating fantasy by slightly perverting what is real and known.

------------------
[1] Dragonball Z, ep. 28, ‘Goku’s Arrival’. Within the episode, the Saiyan warrior Nappa asking "Vegeta, what does the scouter say about his power level?" Vegeta replies, "It's over 9000!" and then crushes the scouter in his hand. The scene is completely overdramatic and the power level 9000 seems to completely arbitrary. The scene was made famous and achieved meme status when it was posted by the user Kajetokun on YouTube in its entirety once and then replayed several times at a variety of speeds, and interspersed with a clip from GaoGaiGar. The term has now come to mean ‘a great deal’ or an simply an unquantifiably-large amount. Dragonball Z became known for its focus on fighting and violence yet created as a cartoon and marketed at children. Ten points if used to describe violence and pays homage to the original context.