REVIEW: The Band, It makes no difference- Rohan Schwartz

Apathy. Pathos. Everything is the same, it may as well all collapse, or condense, whatever, either one, it doesn’t matter which, and that’s the point: artistic apathy. That’s what is happening in the magazine, ‘Bohemia’ (below), produced by Schwartz: layers of images and text all flattened out to one plane, unreadable, indistinguishable, a huge mess of corrupted visual data, all of it as equally important, or as unimportant, as each other. 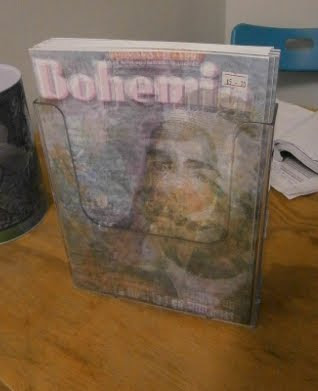 Forget art history, or arts theoretical frameworks, the ideology for an artistic practice or exhibition can be formed song titles that express the aforementioned lament (below). Abandon thought and consume popular music in lieu of reading philosophy. 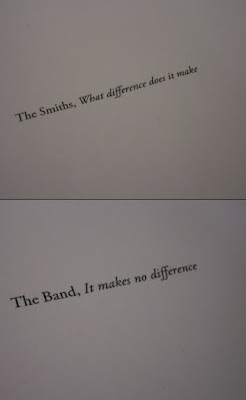 On one table is a copy of The Labyrinth of Solitude with a colour photocopied selection of Australian currency peeking out from the pages (below). If we are to learn anything from Octavio Paz, it’s that ‘Solitude is the profoundest fact of the human condition’ and because it’s so universally familiar, you could probably make a buck out of every single person on the planet by exploiting it. 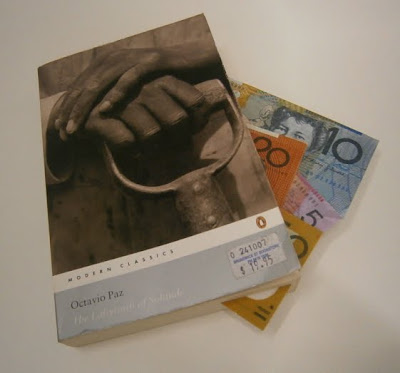 Pop-musicians (inadvertedly?) use it to convince millions of hormone-riddled teenage girls all over the world that their clichéd sonnets are actually personal messages of love and devotion directed to each and every hopeful, naive, little Miss. Religion takes full advantage of the inescapable truth of solitude and death and sets its sights on a target audience well beyond the small demographic of prepubescent fan-girls. Religion aims at everyone, even members of other religions, no holds barred. 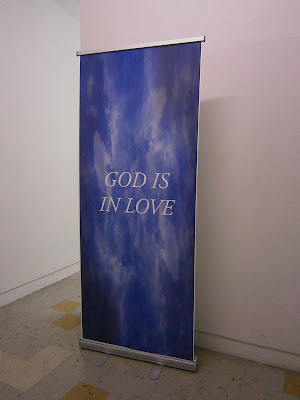 Before you even enter the exhibition you’re faced with a free-standing promotional banner guarding the entrance, however the message it delivers isn’t trying to sell us anything but instead proclaims ‘GOD IS IN LOVE’ (above), but it may as well read ‘SANTA CLAUS IS IN LOVE’. The absurd announcement is printed in virginal, holy white text on a blue skyed photo background, the visual elements amplifying the insanity of speaking for an omnipotent, omniscient, deity whose existence is questionable.

An exhibition review probably shouldn’t be written in suite with the show itself, but (just as Schwartz asks via The Smiths) ‘what difference does it make’?