Mantle sits upon, is the holder and supporter, the upper that is propped and the propped uppera.

Alanna Lorenzon and Lucy Berglund’s exhibition ‘Mantle’ is a selection of completely differing objects and images on display: small, palm-sized, peaceful drawings on paper pinned straight to the wall, a handmade, hooded jacket prototype, a video work, and an installation which engages floor and wall space. This varied itinerary may give the impression of a disjointed and unorganised presentation of separate exploratory artistic material-based experiments, but, in truth, the wide spread of approaches point conceptually inwards to one thoroughly considered idea: the stoic nature of the earth.

The unified collection collectively emphasises the earth as: stone, granite, strata’s of thick, densely packed rock, that are still, that are immobile, worn, heavy. Mantle is the earths cloak and covering but also the planets exoskeleton and innards. 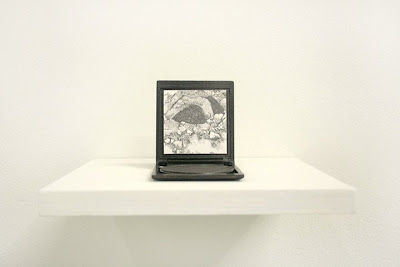 This idea of appearances is directly referenced by one of the works within the exhibition: a small, handheld, plastic, make-up mirror (above) has been converted into an artworks frame. The mirror, a tool to feed vanity and superficiality, has been made redundant and removed, in favour of an image representative of eternal strength, which in comparison is no match for the fleeting, passing of youthful beauty.

Visual cues to stone are repeated throughout the exhibition, from the gentle soft slopes of the grey slate coloured jacket, to the faux-marble finish of a table supporting a television showing a video work comprised of noir-documentary footage on caves. 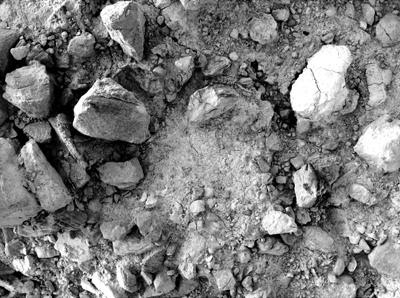 Lorenzon and Berglund show how stone is both macro and micro: stone is on the inside as it is on the outside, regardless of scale. This idea presents rock, at least in concept, as an equal to both the greatest and smallest examples of matter, a partner to atomic particles and celestial planets alike. It is matter which has been and will be.