REVIEW: Awaiting the Night to Fall at Until Never

Why do fairy tales exist? Why do we tell stories now? To lie, to intrigue, to impress and amaze or to simply to entertain with a well exercised imagination. Pascale Mira Tschäni and Michael Husmann Tschäni are story tellers, on the whole their works present a world not so dissimilar to our own in appearance, so that the viewer has a way in to their fabrication, but as familiarity within the story builds it becomes clear that the details are otherworldly visions. 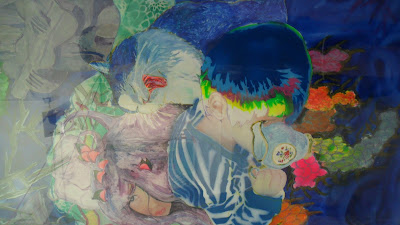 This neuvo- visual fairytale habitat that their protagonists is spread out across multiple mediums: painting, comics, illustration, installation, film, performance and even garments, all of which act as portals for the viewer. These multiple modes of storytelling that are represented in a number of different mediums give each other strength by unifying with a similar aesthetic and colour schemes.

The duo’s paintings are a tribute to the success of their collaborative efforts as a team and to ability to seamlessly mix differing icon and imagery during construction to arrive at a highly finished and balanced work. 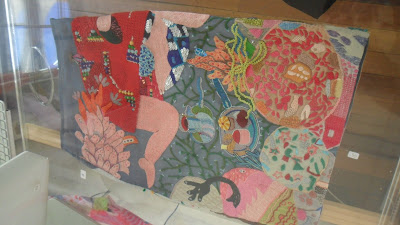 Their Individual mastery of the medium is equally impressive as they combine the use of enamel, oil paint, water colour, crayon, glitter and aerosol in each work to arrive at a holistic finish which could have at any stage of the works practical development quite easily have become an ugly stew of contrasting and opposing mixed media. This is especially noteworthy as the pair work by painting backwards on sheets of clear acrylic. 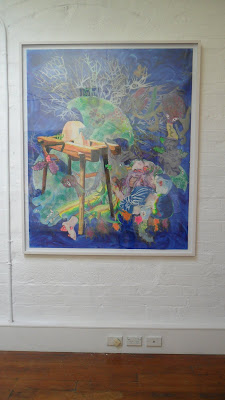 The Husmann/Tschäni mythos is the conceptual bloodline that runs under the surface of all of their work, whether it’s a short comic or a structural installation dominating a galleries’ floor space. The world that is created within any of their works is emulated and expanded upon within every other work. It’s an imagined word of forests in which nature is an equal, children dig up treasure chests in the snow and psychic auras are visible as bright glowing fields. A world in which dreams are realised with stories.

haha, any technique they didn't use on that canvas? :)