Light is crucial to our existence, in many ways. Its metaphorical associations encourage higher evolved inquisitive thinking and moralistic behaviour, its warmth is integral to our biological existence, it enables sight and vision. The sun which our dear planet revolves around is the sole source and deliverer of our planets life giving and vision enabling light. 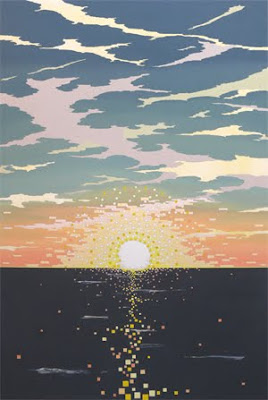 Huygens and Newtons initial argument spawned centuries of research and work conducted by physicists, including Einstein, that has helped form the current scientific theory that all particles, not just light, also have a wave nature, and vice versa.

Viv Millers recent paintings hone in on the dual wave-particle phenomena of light. The exhibition is aptly named ‘The Sun Room’ and each work within contains a blazing re-envisioning of the our closest stars radiant power. Light streams from the white-hot orb in expanding serpentine tentacles of radiation and simultaneously dotted in cubic photon packets within our earthly atmosphere. 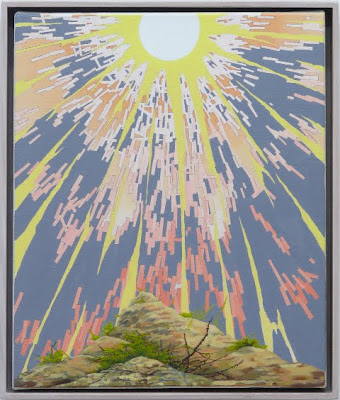 In some paintings a meagre portion of our planet is represented, the top of a barren hill or a far off oceanic horizon whilst the rest of the picture plane is dominated by the burning celestial force, whilst other works present the viewer with the impossibility of being bathed in the radiative force with an excess of energy exploding across the paintings surface.

See Viv Millers ‘The Sun Room’ before the exhibition finishes on the 2nd of April at Neon Parc.

Good review - I saw the exhibition too. Some of the paintings reminded me of the early modernists like the Futurists or Mondrian trying to find an abstract representation of light but Viv Miller is trying for a contemporary version with a combination of the abstract and the representational. However, the cliché painting of a sunset over sea didn’t help the collection.
All Hail the Sungod. Ra! Ra! Ra!

i enjoyed to read the review of sun room. Thanks for sharing!!!