The Outres collection of prints and artifacts is the epitome of cool. It's difficult not to biblically covet every single image and object in their commercial collection: cooler than frost on an Eskimos’ ice-cream and hotter than a chili cookout on the surface of the sun. They are the dealers of contemporary pop and we are the addicts of slick aesthetics. 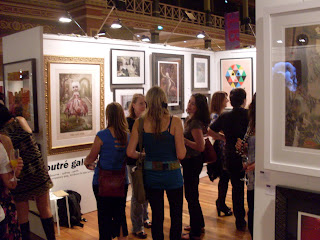 Derek Yanigers beat generation inspired paintings on wood panels. Using the wood grain as a warm background each work uses a minimal colour scheme and painted super flat, which only adds to the crisp cool taste of the work. He must have a secret stash of sweat from the endless finger-clicking that ‘niks would have bopped along to in the ‘60’s whilst listening to avant-garde minimalist jazz, ‘cause I cant think of any other inducible substance that’d transport ones mind to a realm as hip as images he produces,
Daddy-O. 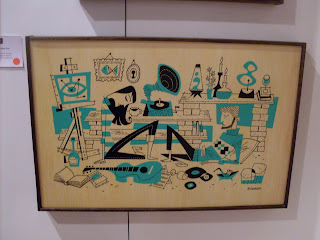 ‘Incarnation’ by Mark Ryden was a showstopper at Melbourne Art 2010, perhaps made popular in part by a Youtube timelapse video showing the artist working on the painting, but even without knowing of the creative process, theres no denying Ryden credit as a master of his craft when face to face with the finished image. Incarnations flesh is porcelain and sickly pure, her gown is lush, fatty protein filled flesh. Even a middle-aged accountant whose last contact with any kind of academic arts training was over 20 years ago in the form of ‘Arts and Craft’ classes during high school was able articulate the nauseating juxtaposition of the pale, white figure and her fleshy, bloody gown. 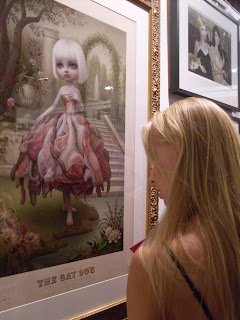 There was nothing but love-love-love at the outré stand/stall/booth during Art Melbourne 2010 and with the application of liquor people’s nerves, eyes and souls were satisfied. There was a communal state of bliss generated by the amount of people interested in the same thing being in the same place all together. One of the most common actions by the public was ‘pointing and smiling’. There was some great original works as well: hand painted bongos by Yaniger, super-superbly crafted paper silhouettes by Beci Orpin, a gorgeous orange clucker by the king’o’kool 50’s styling SHAG (Josh Agyle) and Angelique Houtkamp with her tattoo styled tattooed ladies.

The collaborative team Friends with You received a fair share of attention with their minimal anthropomorphized works. Their works are celebrations of colour and shape, similar to the minimalist colourfield paintings except given cute oval eyes and smiles, making them so much friendlier, particularly Plasma Eyes and Friendship Flag. It’s this melding of a homage to a serious part of art history with the fun child-like instinct of personifying everything with a smiley-face that is both cheekily amusingly clever , and . A war directed by the FwY would be a colourful onslaught of bright chaos, water balloons and waterpistols filled with paint would be standard issue, as opposed to rifles and grenades. 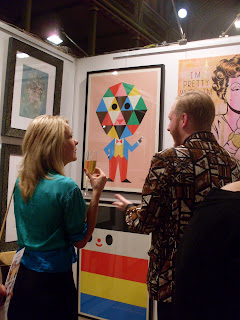 Thankyou Outre for scouring the earth
(earth = pop culture magazines)
and gathering together some of the coolest looking prints this side of the afterlife.

but is it affordable art? or expensive posters?

Good question Marcus, I've asked myself the same question and its personally given me quite a bit of angst. Its a difficult one.

We cannot question that prints are 'editioned art', multiples, or is art only physical paint on canvas? if so, you risk sounding very old fashioned.

Some people only regard the most forward thinking conceptually groundbreaking contemporary work to be art, and that any image is merely illustrative decoration.

Friends With You make work that is essentially the anthropmorphisation of minimalist colour studies and colourfield painting. That is a pretty brilliant way of softening and literally humanising an otherwise unapproachable part of arthistory for the non artisically academic. What better way to introduce people to the appreciation of solid colour and shape than to have it smile at the Viewer?

but yes, 'affordable art, or expensive posters?', I like the idea of the question, that theres these possible discrepencies between things and that they could be divided into two completely opposing catergories, but I also think its a little closedminded and too easy and too limiting.