Faux Thrills is a curious title for Greatest Hits exhibition, kind of a self-depreciating joke that beats the harsh critic to the punch, or punch-line, the title ‘fesses up to its own shortcomings before you’ve seen the show and come to your own conclusion.

Faux Thrills is also a pretty good summary of where art ranks in the entertainment stakes of modern culture today, it kind of falls short in comparison to all the other facets of our lives that bombard us with activity or amusement. It’s no wonder that painting, and by extension: ‘art’, is repeatedly declared dead, gallery attendance numbers have fallen, patronage of the visual arts has declined because as opposed to the days of olde when salon shows were blockbuster crowd summmoners, we can get our fill of amusement and entertainment from pocket sized personal video media or gaming devices, (I’m looking at you Nintendo DS and iProducts), or movies at the cinema which are feature entirely new imagined worlds in all the glory of the gimmicky 3-D, and let’s not forget to mention all the time-eating, internet platforms like chatroulette which can instantly connect you to a live streaming video conversation with a complete stranger from anywhere in the world. How can art compete with these attention grabbing fixtures of our daily life? To engage with art seems laborious in comparison, when instant gratification is a click away in the form of gaming, video clips, music, movies or websites designed as tools of procrastination. 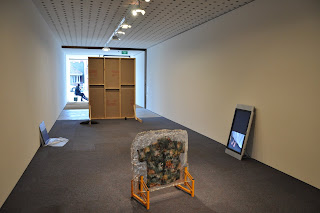 “I know what he’s talking about, its all, like, there’s so much to do, yeah? And so like, people have just forgotten about art, yeah?”
“yeah, like, just painting and shit is boring now, it’s all-”
“-yeah like painting, is just like something to look at, and like, but like, even if I’m at the tram stop I’m checking my email or like playing games and shit on my phone, yeah?”

This sense of failure, or potential failure is a recurring element in Greatest Hits work, an example of this is the way that often there will be components of their exhibitions that are constructed haphazardly, as if they were constructed, or deconstructed, without thought or care, and other components which juxtapose this seemingly slap-dash work ethic which are finely crafted, well made and represent a considerable amount of time or skill, or both, in their construction.

This way of working has usually been directly employed in making some kind of intervention with the exhibition space itself. Upon entering CCP, from the first step, the Viewer is inadvertedly interacting with one aspect of the artists’ intervention with the gallery environment, because they’ve ended up carpeting Gallery 1, so there’s no way around ‘touching the art’ so to speak, the ‘art’ being the carpet added by Greatest Hits, because you’re in fact walking on it, the audience is literally walking all over the artists action. The carpet is very much noticeable as so few galleries or exhibition spaces are carpeted, and it’s not a terribly great carpet either which only adds to your attention being drawn to it. It in itself is a kind of failure of carpet, if carpets were able to fail, then this carpet would be. 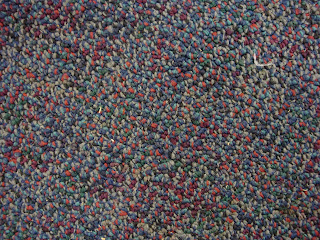 “Dude do you remember those carpets at your Mums?”
“when we were kids yeah?”
“And they were all sticky and shit?”
“Yeah like you’d get your burger and shit and you couldnt even walk to your table”
“hahaha, oh yeah, classic.”
“hahahahaha, oh yeah man, gotta love it huh?”
“hahahahaha”
“hahahaha”

The second element is more constructed: It’s a wall, like any other gallery wall at first, centered in the space so that foot traffic entering the gallery have to split and pass around it, and as soon as you do pass it, you realise that it isn’t a temporary wall that the gallery have installed in the space because its only half-built, the side facing the inside of the gallery doesn’t have plasterboard covering the cross beams, it’s just a fake, or unfinished, probably the later because there’s a glass of cola sitting on the floor. Even on its finished display side, the side that you see as you enter the space, doesn’t have work hanging on it or a TV bracketed to it, its potential is intentionally underutilised and features a ripped-out magazine page. 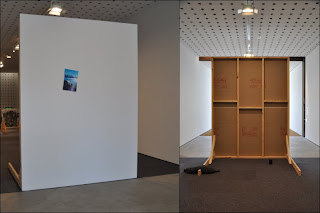 It’s a joke on exhibition presentation, but not in malice because they’ve gone to the effort to emulate, it’s more of a joke between friends, if it is possible to be friends with something abstract, like the concepts of exhibition installation. This denial of the spaces’ use reminded me of their work in an exhibition at Platform in which they’d spray painted the glass panel of the window box, essentially making it redundant.

“Oh yeah, yeah, I saw that show man.”
“Yeah it was good, huh?”
“Yeah i think I seen that movie at the same time yeah?”
“Which?”
“that zombie one man, with uh, Woody Harrellson”
“it wasn’t out then, was it?”
“Nah, man Jas downloaded it and burnt it for me” 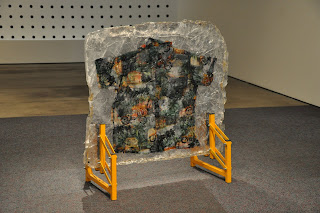 The show-grabber was an object installed on two metal braces or stands. It appears to be a roughly cut or chiseled block of ice with a Hawaiian shirt frozen inside. Two separate people after the show admitted that they thought the sculpture was actually real ice, frozen water and were briefly perplexed as to why it wasn’t melting. It’s preservation of bad-taste: today’s fine weather is tomorrows ice age and our cultural and aesthetically embarrassing, mass produced, commercial items of today will be tomorrows fossils. Who knows, in a thousand years time, when the fragile, delicate artworks don’t survive, maybe the crazy frog ringtones, talking Andy Millman dolls and Happy Meal Toys will be elevated from common, crappy landfill to a useable resource commodity like oil, or worse, from our point of view, they’ll be collected and treasured as ancient oddities of a time long gone. Machine made, plastic molded novelties may sit alongside handmade relics and artifacts. Why wait a thousand years for that discrepancy to evaporate?
Posted by Ace at 2:01 AM

The idea of creating carpet as art is very Jackson Pollock gesture. Nine Lives gallery in Brisbane did a similar thing where the artist covered the floor with Maple leaves so you had to work on them to get to the work.