Large seemingly scientific white structural models hang from the ceiling, a video work of a melting aeroplane made out of ice flies through an unidentifiable sky, and a concrete totem sits in the centre of the exhibition like an anchor, especially when compared to the apparently intricate paper models and projected video work. These three components create the trinity that was Ross Coulters ‘Prelude’ Seventh gallery. Each portion, a different medium, size, but all virtually crying out a in chorused unison of a common ideal and all linked in their usage of one form: the humble paper plane. 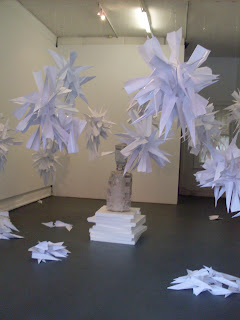 The paper plane is perhaps one of the simplest most popularly known forms of paper folding that also has a function: flight.[1] This function is removed from the hundreds of actual folded paper planes in the exhibition though, instead, they’ve been taped together, all noses pointing inward, in spherical hives or cocoons of paper planes, all cluster-fucking in groups of origami orgies. Plane stars. There’s a punk, DIY immediacy of the sculptural forms suggested construction that attests to the crass interpretation of their gathering. Even their ability to be used, thrown, folded or unfolded (deconstructed/destroyed) is negated by their proximity of closeness to each other.

There seems two groups of planes within each cluster: one group seems to all be pushing towards the center with equal force to every other, and the others are pushing away from the center, heading out at every angle, all aiming for the same indiscriminate point in three dimensional space, simultaneous black hole implosion and explosion of paper planes. Their collective honing in, or racing away from this one point is suicidal for the individual as they become functionless, all simultaneously denying each other the non-existent Iliad they’re aiming for, making each ones effort a negation of anothers effort.[2] 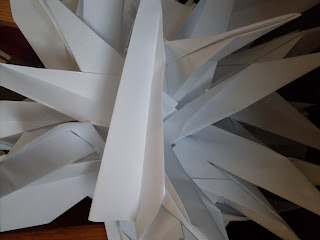 The paper plane motif is repeated in the video work, except the paper plane in the video is made entirely of ice. Impossibly, it flies across a sky-scape, melting continuously, the further it flies, the less it exists. It’s a bittersweet existential prank bequeathed on/to it by its creator. To carry out its natural function, to fly, leads to its inevitable slow melting destruction.

Ice plane exists in a state of perpetual forward motion and continual demise. There’s no Sisyphean[3] commute, it’s all one way, but to the same ends. Smooth sailing in unknown skies, ice-planes location on this functionless flight is never revealed, all sky looks the same, with no markers, landmarks, no progress can be made or measured. Existence and actions are purposeless, it’s just a journey, details are superfluous and passed fleetingly.

Surrounded by the exploding/imploding plane stars is a concrete totem: an abstract pillar form with cubic sections, a mold. It is not a plane, but in the top most section are two planes flying into each side of it, their noses caught midflight, trapped in the stone. Its materiality is a stark contrast to the planes, weighted, hard, serious. The planes have not crashed into the stone because crashing implies an event of a temporary nature, whilst the union of planes and cement looks frozen, a moment in time caught and held. 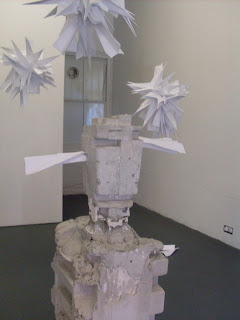 Amusement. Boredom. Pranks. These are the states that usually precede a paper planes creation. They’re simple, cheap, functional, and inherently temporary and not the most robust construction. Coulter knows this, each work parodies it, or more correctly, the parody of itself, its own being is bought to the fore, and we realize “it’s a joke about a joke, like a joke trying to make another joke laugh”[4]