‘Red wire goes to the red plug, yellow to the yellow, its easy’

‘yeah but theres no sound’

‘jiggle the plug, is the plug pushed in completely?’

An AV cable (AV being short for Audio Visual) is the link that allows the transmission of sound and image between compatible electronic media devices. Dylan Martorell curates ‘VA’ at utopian slumps, an inversion of AV, a group exhibition that consists of artists that make visual work first, and are secondly, also interested in sound, visual before audio, ‘V’ before ‘A’.

The exhibition is a visual sonnet to sound, played out by the overall composition of the collection of objects and images, a symphony for the eyes. Martorell adopts the dual role of both curator and exhibitor, the concept behind the exhibition is one which applies to his own practice and bringing other artists that also have similar interests and ideas provides the depth of investigation that occurs with multiple perspectives, rather than the tunnel vision and ego that can invariably accompany a solo exhibition. 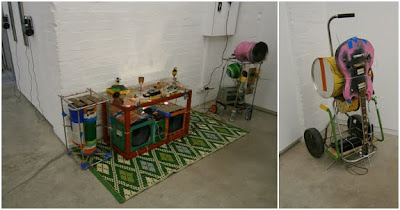 Martorells own work (above) thunders like a jazz festival of found objects, a collection of loud bold plastic-povera artefacts rearranged into a greater orchestral composition by confident intuition, and applying utilitarian connective elements (like string and cable ties) that hold the end product together, much like the repetition of chords and riffs that will bind a song together.

There is an obvious fusion of genres in Martorells work: a heavy metal styled medieval goblet sits above Aztec or Peruvian patterned matting, next to a Rastafarian coloured budgerigar, and a jerry rigged industrial xylophone made from rusting scrap-metal panels, all elements harmoniously in chorus, singing out loudly, and brightly.

These assemblages of Martorells also appear to be functional instruments of sorts that could be used to make sound, simply because of the transparent use of actual musical instruments, old speakers or other audio equipment, as well as other non-musical objects of which it wouldn’t be difficult to imagine being used as makeshift instruments themselves. 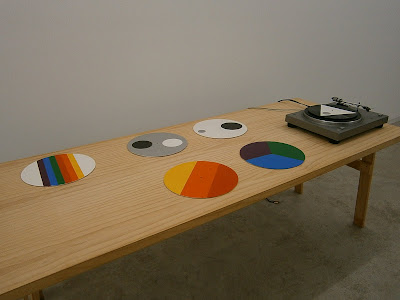 In comparison to Martorells work as loud sight-noise, John Nixon’s Colour Rythym Discs (above) are ordered, bold, staccato punctuations of specific and condensed colour-studies. Using the measurements of antiquated vinyl records as the uniformed foundations for his straight-edged, abstract paintings, which with their small scale and unique shape, read like colourfield miniatures, or more geographically, they are the result of what would happen should the colourfield be subdivided into more manageable, smaller suburban plots of land: individual partial-spectrum inquisitions joined by similarity of format and underlying material ground.

These Colour Rhythm Discs of Nixon also poke fun at arts general lack of function; even though the Colour Rhythm Discs are imposters masquerading as vinyl records, the charade is short lived and the discs knowingly reveal their musical impotence as they superfluously rotate on a operational record player, each of them performing a perfect impersonation of a Cage 3’14” remix.

The idea of images or information in disguise and the artists hand in the removal of function is also the crux of Marco Fusinato’s Mass Black Implosion (Aggolomeration, Anestis, Logothetis) Variation II (above left) and Victor Meertens The Hidden Records of Historic Paintings and his unplayable ‘cooked’ LP records (above right). In Fusinato’s work, he adopts the written language of music but converts the markings till they are an unreadable and functionless layered mass of information. Meertens takes advantage of the multiple definition of the world ‘record’, using the pun as the punchline for his defaced LP record sleeves whilst the records themselves have been reduced to mutilated shadows of their prior pristine forms, structurally disfigured by searing temperatures.

The real strength in Martorell’s curatorial casting is that he has chosen artists that recognise the unique nuances that make the visual and audial different, and instead of trying to translate these specific portions of non-transference, they are bought to the fore in their exclusion and absence: the lack of sound in Nixons discs, Martorells functional detritus reformed into a collective, non-usable art object, the information of sheet music made redundant by Fusinato, and Meertens musically-crippled and physically-mutated vinyl records. These works only highlight how neither the image or sound can supersede the qualities each other, but each can be used to individually bolster the other when dancing in duality, like in a film, the harmonius melding of audio and visual as AV, or, VA.