Kiss me. Talk to me. Love me. F-ck me. I am Tim Andrew. Okay, no, I'm not Tim Andrew, but that was the first impression I got from his exhibition. If Harrell Fletcher has taught us anything, it’s that human beings are complex and interesting. Andrew is no exception. I used the title of his exhibition, "Look Hard", as some sort of vague instruction for deciphering the enigma that is Tim Andrew. I looked at Tim Andrew. I looked hard. He writes honestly, and earnestly, addressing the reader directly, from which I guessed he'd be the stereotypical "sensitive-yet-tortured-artist"... yet some of his work is quite brazen, confident and crass. He’s doing a Masters of Fine Art so he must have some high, academic ideals... yet he does illustrative work for a men’s booby magazine (some articles being: the dodgy guide "how to make your crap car look a million bucks" and the classy "how to piss your name in the snow"). His work in the exhibition is hung salon style yet the work is stencilled and painted in bright colours. Like some sort of over eager self-promotionalist, he had three-fold, colour printed card booklets for free but also included a 'special gift' inside each one (a signed and numbered postcard size print of one of the works) which backed up his claim: "I like the idea that the work is slightly less exclusive when there is more than one, I really want everyone to own something I’ve made" printed in the booklet... how sweet is this guy?

Don’t let that last note fool you though. Sure, what Andrew writes can be, is, very sweet and endearing, but that’s just one side of him. Do a quick visual scan of a wall covered in his paintings and you'll see the crude Andrew, the horny Andrew, and the sarcastic and sardonic Andrew. Yes. Tim Andrew is anything but one sided. This is refreshing in an art world that promotes signature-styles, exclusivity, and rarity. Andrew turns up his nose, blows a raspberry, flips the bird (depending on which Andrew we're referring to of course) to these ideas and is evidently quite comfortable in his artistic and personal self to do so. He is human. His text isn’t the drivel of self righteous, pretentious up-and-comings, nor is it the soulless words that artists so often regurgitate from the well known tomes of art theory and history: Andrew is the human voice on the phone help line when you were expecting a series of computer controlled, pre-recorded, automated responses. 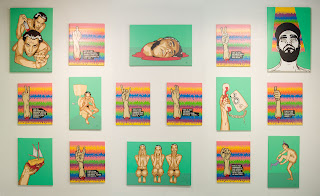 Andrew isn’t crude like the uncle who'd tell a grossly (in both senses) inappropriate joke to complete strangers whenever he was introduced, no, Andrew doesn’t offer other peoples uncomfortableness or awkwardness as entertainment, he offers his own. In several paintings he paints himself not only naked, but also in a series of embarrassing situations. In some of these situations Andrew is being taken advantage of, physically debased and degraded whilst being vulnerably naked, but who would do that? Who would take advantage of him whilst he was naked and physical and sexually abuse him? Of course the answer is obviously clear when looking at the image: Andrew is both the villain and the victim, the violent instigator and the fearful innocent, the devious sex fiend and the cowering, unfortunate causality. It isn’t just his own psyche we think we're privileged enough to glimpse in at through the paintings, but our own. We, however don’t want to, nor will we, admit it, and we're quite happy and thankful to Andrew for both being the monster he is and the hapless sucker, mainly so we don’t have to be that person but also so we can see what we've only thought about.

If only we could live out "you bastard, you ruined me life...", and ‘take care’ of that pesky procrastinator, lazy son of a bitch we all have inside of us, holding us back, preventing us from ever truly accomplishing greatness... or we could always threaten them with a thick black marker and ask "do I have to write it on your fucking eyeball...", that would put that good-for-nothing, deadline-misser in their place. Even the concept of masturbation looks equal parts entertaining, embarrassing and pathetic-failure in both "hey ladies, you could be one of these lucky men..." and "one man party" and furthermore, the spirit expressed in both works is sadly all too familiar. Freud would have a field day with Andrew although I'm sure it'd only be because Andrew has made these usually, inaccessible, subconscious notions of self and other public.

The back of his exhibition booklet features a dating-service style profile of information which includes his star sign, what he’s currently reading and pets along with a nice little colour photo. He’s banking on the fact you’ll feel like you’ve been long friends and know plenty about him by the time you’re walking out of the gallery after seeing the exhibition. Tim Andrew wants to be your friend. He finds you interesting and you, no doubt will find him interesting. He’s a little bit like Tyler Durden from Fight Club. Except Andrew isn’t going to make you fight anyone or blow anything up. He definitely has a similar sense of humour but in terms of similarities, that’s about it. He’s a lot like you in fact. More so than you could possibly realise and yet at the same time he’s completely different because he’ll write you only think, make visually real what you can only imagine and whilst he might appear to be a lot more immature and disgusting than you, he’s probably a lot friendlier and more loved than you. It’s okay though; he painted you a picture to make you feel better.

http://www.kingsartistrun.com.au/
Posted by Ace at 5:57 AM