We've all picked up a shell, put it to our ear, and heard a simulation of ocean noise coming from within. We act out this little, clichéd performance to momentarily be alive in the moment, a free spirit, a hippy, a beach bum, for a fleeting moment, listening to sound sound of an endless ocean coming from deep within a tiny shell, we are no longer ourselves but higher beings, beach-Buddhists, free of worry or anxiety, completely at one with the sand, the shore and the universe. Unfortunately it’s a pile of fishcrap: we know its not true, but we delude ourselves for a moment because of the perceived inner peace it brings. We aren’t surf-shamans, we're escapists and malcontents searching for a deep, holier connection, but after we've taken the shell away from our ear and wiped the stupid grin from our face, we're back in the "real world", the depressing reality we know all too well. We trudge back to our hotel rooms, perhaps eat a meal in a restaurant, and give little thought to the small, saved fortune we're spending on decadent luxuries that would ordinarily be out of the question when working the 9 to 5 and catching overcrowded, poor public transport in order to make the most of every cent. We realise there’s plastic and rubbish on the beach but we only notice for the first time when the shell has been moved far enough away to not hear the impossible ocean within it anymore. 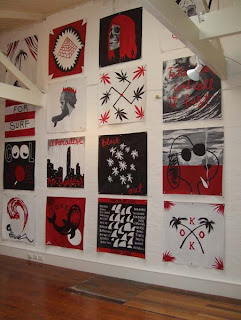 McNeil taps into the spirit of the sea but not in the pseudo-truistic way already mentioned. He taps into the whoooooole thing: the ocean in the shell, the plastic rubbish strewn in the sand, the rhythm of the universe, the commercial nature of the culture, the beautiful melding of human being and mother nature, and the immature drug humour of the surfers. Psychic, cognitive eel-like tentacles reach out from McNeils consciousness, absorbing the collective mind space of surfer, jellyfish, great white, seadog, tourist, lout and barnacle alike, channelling them all at maximum volume simultaneously. As a surf-shaman McNeil also uses the power of icons and symbols, sometimes doubling or tripling their inherent visual power by combining them to form a single more powerful image (swastikas combine with anchors and marijuana leaves, another anchor has two eyes added to it so that it becomes a nose and a grin with hooked ends). Similarly he does the same with words and text: two old words create a new one, words of opposite meanings take on a new one when placed next to each other- McNeils insight to the specific and surprisingly adaptable meanings of these words comes from an intimate knowledge, use and familiarity of them. 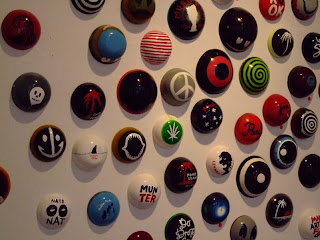 What McNeil is NOT doing is: clinically observing and replicating for the viewer. He is very much involved in the subject matter, it’s a personal diary of pictures that tells a history, in both text and image, of danger, euphoria, materialism, land developers, great times, death, commercialism, big hits and near misses. Not all the information of all the stories and indeed the nuances they hold will be immediately accessible, but like the seashell with the impossible ocean, spend time with the work, get into lazy holiday mode, let your eyes wander slowly over the anthology and listen to the soft roar of the sea.

http://until-never.blogspot.com/
Posted by Ace at 8:08 PM