"Throw off your shackles, slaves! We are no longer servants to this history, this economy, these laws, these false idols. Wage-less servitude is over, where’s our backpay b*****'s!?!"

Overall, there is something subversively degenerate about Kitchin's "Take the Long Road Home". He doesnt make images for his work, he takes them. He doesnt pay homage to or elevate their respected status, he desecrates them. Expressionistic, visceral, paint-dripped lines, trap the image behind its suggested bars of imprisonment. Energetic, frenzied, unfamiliar icons, signs and symbols are drawn over the top of the authoritarian images of power: idols of gods, statues of holy men, photo's of shamans and instructional diagrams for life preserving procedures. 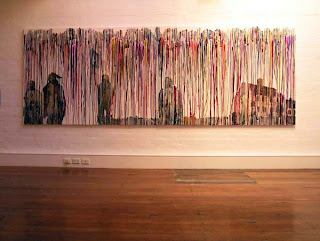 The exhibitions title work, "take the long road home", features only a few figures across the picture plane, seperated by empty space and hidden in a rain of vertical paint lines. There's a paranoia associated with the unknown figures, their identities almost knowingly obscured, in hiding amongst the bright, psychedelic, linear distortion. If only the information concealed in the lines could be read, maybe something could be gleaned in order to have an advantage in the bright but periless landscape, but these are not seperated or ordered like that of a barcode, these are frenzy-coloured, kineticly layered and dangerously unpredictable. Whatever information that could be deciphered has the potential to be fatally incorrect, making any effort quite futile. 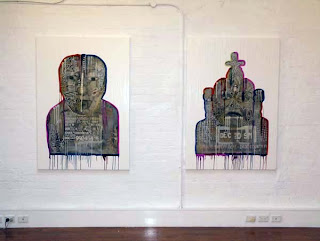 Within the four canvases along the opposite wall, Kitchin has enslaved once powerful icons and god's of ancient cultures in the sterile unforgiving prison of the white surface. Futhermore, once entrapped they are stripped of their power and humiliated by being worked over, degraded. Their once fear inspiring image and names, forgotton and reduced to a print in a magazine or a book, and now, stolen by Kitchin for the canvas.

Kitchin has been busy indeed and will be showing in the upcoming "Graphein" curated by Peter Daverington at Lindberg Contemporary Art and Ash Keating's "2020?" a large-scale, evolving installation at the Meat Market. In the mean time however, get a glimpse at these ultra-slick, resin coated gallery works, fortunately on show for a month thanks to Until Never's generous exhibition lengths.