ON NOW- Over Here, Over There- Bonnie Lane

Bonnie Lane is becoming quite proficient at combining her minimalist video work with sculptural or installative elements within the gallery space. In an exhibition earlier this year at Seventh gallery, Lane projected a video of her bust onto a white bed which created a ghostly double of herself, composed of light and restricted to existence inside the bed. This poor soul can never feel the sweet release of sleep, instead she lays conscious, looking up at the ceiling and the viewer, eternally living the works title: “Sleepless”. 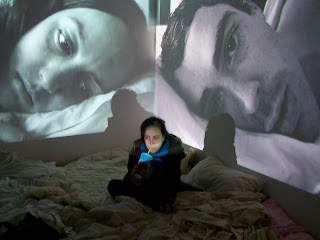 Both “Sleepless” and “Over Here, Over There” feature the play of very selective and specific video and installation. Lane seems to prefer to create video that encompasses a minimalist ideology in the sense that, at first, the videos appear to be static images until the viewer notices the subject move ever so slightly. Lane projects both herself and he partners faces, lying sideways in bed, on two walls that meet in a corner. The figures look at eachother across the gap of the corner, the audience also getting caught in the large width of the gaze, privelidged to be involved in such an intimate connection. The floorspace between the projections, is that of an oversized bed surface, doonas and pillows repeated like it an organic bedded growth protruding from the corner and mirroring in 'real-space' the beds that form the grounding element in the video component of the work that the lovers lie on.

Lane described the work as an exploration of “longing to be utterly and entirely connected to another person” and as predicted, Lane has focused on the more pure elements of an intimate relationship. The ‘gaze’ here is the unspoken connection, a shared understanding through presence without words. Findlay (seemingly more genuinely tired than Lane) looks forward, meeting the viewer and his partners eyes, despite his heavy eyelids, to be comforted in Lanes clam, large, doe eyes. Each are both lost in eachother, serene and inviting the viewer to share that connection with them.
Posted by Ace at 2:10 AM

great installation view. now one of my dearest ambitions is to be reviewed by dead hare.