James Callahan's work is the result of an outside fringe culture turned into advertising illustration, a decade after the fact. It is pure 1980’s skate culture aesthetic distilled into screen prints and fine lined drawings: pure barf (which is also the artists moniker), death, sex, violence, gross-out, ugliness, evil. The advantage of using the imagery, archetypes and icons long after the scene has changed and mutated aesthecially is that it can be viewed retrospectively and consequently, edited ruthlessly in the process of re-creation to formulate a newer, more defined and more potent version of the predecessors that it is climbing onto the shoulders of. 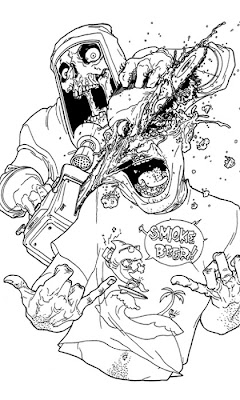 Callahan blends styles, a semi real illustrative tone of thick line-work is fused with the imagery of comic book sensibilities. Essentially everything is about failure on some level and to some degree. A tagline on the faux comic covers claims that it is ‘semi-sensationalish’. ‘Sensationalish’ is of course not a real word, its only half a word, an attempt at creating a word, a failure of a word, a semi-word. 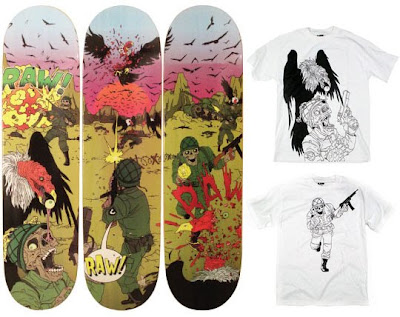 The shocks are 90% nostalgia and tradition, like listening to Christmas carols in the month of March or rifling through boxes of Halloween paraphernalia or costumes mid-year for an out of season party or practical joke. His images depict the rotting corpses of cheerleaders play gridiron using a member of the teams dismembered head in lieu of the pigskin, in another a bat flies toward the viewer in a howling frenzy with two flick knives protruding from its chest, whilst in another picture plane anonymous and menacing figures wearing authorative hazchem suits are attacked by muscular mutants of a future toxic apocalypse in a style that pays tribute to Troma. Fail, fail, fail. Fail is cool. Again. 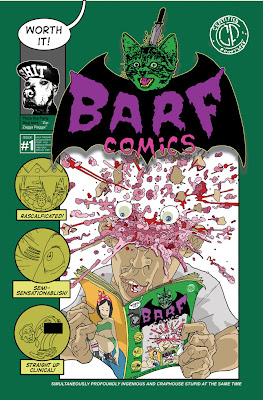 There are a few high brow references hidden within the imagery of the screenprints. In one small circular bordered area of a poster, prongs of a fork move in toward an open starring eye ball (see above), not unlike the infamous Dali eyeball slicing, except less professional and more punk, in the sense that the mutilation doesn’t come from a precise, determined and slow, methodic, purposeful movement using a pristine surgical scalpel, but from a presumably fast, aggressive, thrust with a common piece of cutlery that shares a likeness to the devils pitchfork.

Callahan wants to raise hell in his intricate line drawings but only to perfectly capture its shortcomings to make fun of it in the process, and, of all entrepreneurial pursuits that turn a dollar, drawing pictures of the gross and macabre seems better than most.