The gallery’s walls push forward Locust Jones work into the centre of the space. Violently. Towards the viewer. Along each wall, panels of white paper span from end to end. At first the panoramic pieces only reveal tortured black ink on thick Italian paper, the surface of which bends and warps as if its been assaulted, a result of either the physical weight of ink on the page or an after-effect of the drying process, changing the density of the affected areas surface. 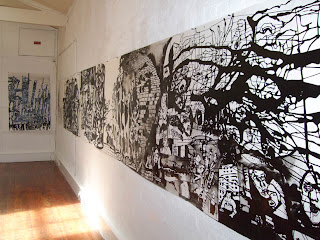 This brazen attack of ink on paper is emulated in the forms created with the ink, which seem to become more recognisable and detailed the longer one looks. No more does the work appear to be an exercise in replicating monochromatic, expressive splatter paintings of the 1960's as it did when first entering the room. The vertical lines become buildings, skyscrapers, no, more like... monuments on charcoaled landscapes, burnt to the ground, precariously angled aircraft in anxious flight patterns, blackened skeletal wire bridges, men, dogs, gasmasks littering the ground. Each mark earning more respect with every passing second as more detail becomes apparent and as such becomes recognised as a deliberate process as opposed to leaving it to being a random aesthetically fortunate accident. 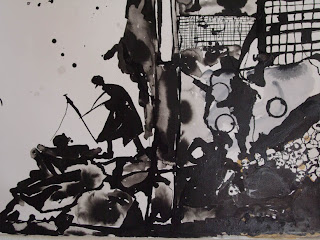 Looking back across the work, familiar elements that were thought to be known deliver a little more visual information than they did before and change again for the viewer: the wire bridges become rusting hulks in disrepair, the men fascist soldiers, the dogs suddenly rabid- feral, and the gasmasks become the genocidal remains: the skulls of innocent men, women and children. In this way Jones lets the viewer in on a prophetic experience, seeing through his eyes at governments falling, turbulent economies and the age-old anger man can have for his brother. Jones has only foretold to a certain point though, making the aftermath of this very real mantic vision proposedly bleak but altogether unknown. 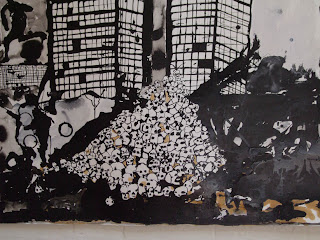 (for additional text there is a limited supply of brochures about Locusts Jones work from a previous show, enquire with gallery staff for a copy if they are available)